Time and Place, a talk with my mom

By MartijnVeldhoen on 25 november 2014 in Films / Video installations 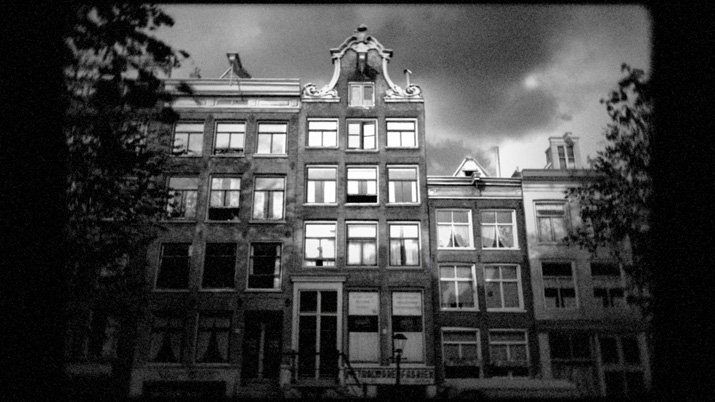 Time and Place, a talk with my mom.

The mother (Lotje Ruting) of the filmmaker tells about how her life has gone when she first came to live in a poorly maintained canal house in Amsterdam fifty years ago. The rapid career of the father (Aatje Veldhoen); the dramatic separation; her four children she raised alone; she tries to remember the whole story. But she doesn’t want her face in the picture and there are only a few photo’s. Her story is however told in a visual manner using unorthodox reconstruction techniques. In the end not everything will be as ‘real’ as expected.

The melancholy of reconstruction.
I wanted to make a documentary without the use of the common interview structure: so, no talking heads in this film, but an emphasis on the memories (and failing memories) of the principal character: my mother.

By directly converting her memories into image, I’m visualizing her frantic attempts to remember what happened in the house she lived in for 52 years. Memories first usually produce atmospheres, sounds, or images; the verbal “translation” takes place only a moment later. In this film we are, as it were, witnesses of the images that appear in her mind’s eye at the moment she remembers them.

All the audio recordings, photographs, computer animations, sparse 16mm and
video recordings that were available for these visualizations of her memory have been worked on to create a unity: photo’s are not put in a “slide-show”, but are integrated in the movements of the short film clips and sounds are put under the photo’s to create a film-like atmosphere.

Time
Through the memories of the mother we are also the witness of the turbulent cultural and social changes that went about in the sixties seventies and eighties in Amsterdam. The father of the family is an artist that makes controversial prints with explicit sexual content and is one of the first to proclaim sexual freedom. And later on, in the eighties, the eldest son, David, is one of the first to start squatting in Amsterdam; its his way to protest against the failing housing programs of the municipality.
But this film is also a reflection on the downside of the experiments of the sixties and seventies. A father leaving his wife and 4 children because of his urge for sexual freedom and self-realization isn’t exactly something that works well in the psyche of young children.

Place
The film is restricted in time by the 18th century canal house my mother lived in for 52 years. The house is situated in the famous Jordaan neighborhood. Within the time she lived there, it turned around 180 degrees: it went from the poorest, into one of the richest and most popular neighbourhoods of the city.

Visual material
Unfortunately, there was a serious lack of visual material for the film. Also the fact that my mother did not want her face to appear in the movie didn’t make it easier. That’s why I had to make some unorthodox decisions in the visual reconstruction of her memories – and of the conversation we had. Time and Place has therefore become more of a re-enactment of this conversation then an actual “objective” recording of it.
Towards the end of the film I reveal how far I went in this re-enactment. As a result, the film has also become a personal exploration of how to visualize something very dear.