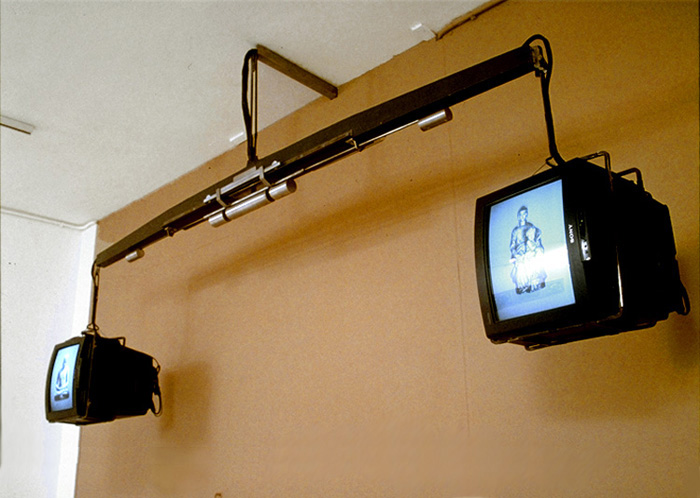 Status Quo presents us with an associative and at certain moments an almost apocalyptic series of images of men and women from prehistoric times to the present day. The installation consists of two monitors, each mounted on either end of a large pair of scales fixed to the wall.

read more
One monitor represents the “image of man” and the other, the “image of woman”. By means of a syncstarter and a mechanised timer, the movement of the scales expresses the “weight” of the video images.

Starting with two archetipical images – a Buddha and a Madonna – one of the monitors proceeds to picture a series of man/woman images, while the other monitor becomes black. The scales now tip in favour of the monitor showing the man/woman images. When these images cease, the monitor becomes “lighter” and rises until it is once again in per- fect balance with the other monitor, whose screen meanwhile reveals the serene images of the Buddha and Madonna. Following a status quo of about one minute, a series of images is once more set in motion and the scales are again thrown out of balance…

Veldhoen introduces his own drawings and narrative text into the image material he has collected, thereby emphasising the fact that his vision has an artistic, rather that a strictly scientific genesis. Status Quo shows us that every era has had its own stereotypical man/ woman cultural image, as in response to some universal, psychological, human need. The fact that nowadays these stereotypical role-patterns appear more extreme and more aggressive than ever strikes Veldhoen as particularly paradoxical when so much talk is currently going on about emancipation and the maintenance of peace.

It could well be our own mass media who see it that “outmoded” images of man and woman continue to receive widespread representation, which gradually and “against better judgement” inevitably become reinforced. In Status Quo we are presented graphically with some exceptionally perceptive, weighty images…