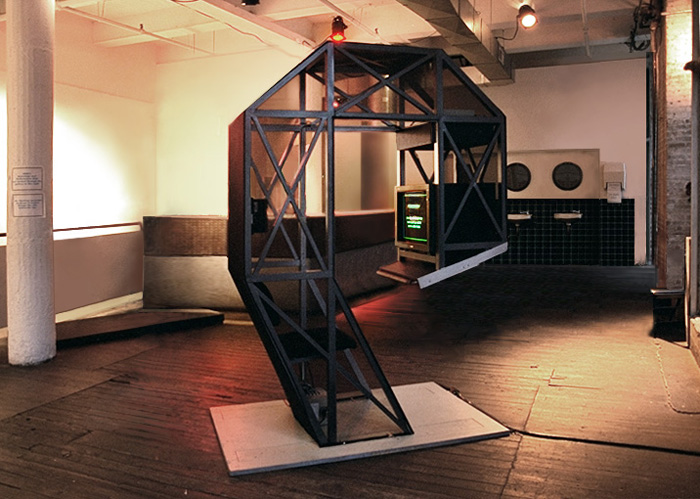 The computer installation Ludwig consists of a large steel construction in which you can sit down. Once you are seated, you activate Ludwig by pulling a panel towards you. This also locks you also into the apparatus.

read more
Ludwig patiently explains to you how its ‘interface’ works: a panel that is divided into nine numbered fields, representing nine themes which are displayed on the screen. War, infinity, human, reality, games, artificial intelligence, identity and ‘about me’. Subjects about which Ludwig pretends to know everything: he is connected with cable television and computer networks all over the world. By keeping a field number pressed in, you activate the corresponding theme. ‘My superior soft and hardware will guide you through the theme by making interactive use of the image and sound databases’. Ludwig certainly puts on airs about his own knowledge. Full of expectations you put Ludwig on to work, but the more themes you put on, the more it becomes obvious that he is mainly trying to imitate. Time and again during the treatment of an ‘item’, you come across mistakes, with ‘error messages’ or ‘system messages’ bearing witness of Luwig’s impotence. When you try to examine ‘identity’ you are faced with ‘access denied’, with ‘reality’ you are first confronted with ‘sorry, wrong reality’ and then you are summoned to choose another subject because the reality images Ludwig shows would only be ‘boring’. With ‘artificial intelligence’, the verdict is: ‘Error, attempt to create artificial reality failed’. And with ‘human’, Ludwig completely runs amuck. He constantly jams up. When Ludwig asks you to make a choice (‘inter activity’), you become figuratively entangled as well. Ludwig is a bragger, boasting his own knowledge, like the other Ludwig I , the Bavarian monarch and autocrat. The installation Ludwig not only ridicules our believe in the computer and information overload produced by the media, but also the vanity of humanity itself witness the images you are shown. Moreover because the viewer is locked in, he will bodily experience our subservience to technology.

LUDWIG was exhibited at the NIMk/Montevideo and at the Soho Arts Festival in New York (thanks to the Mondriaan Foundation).