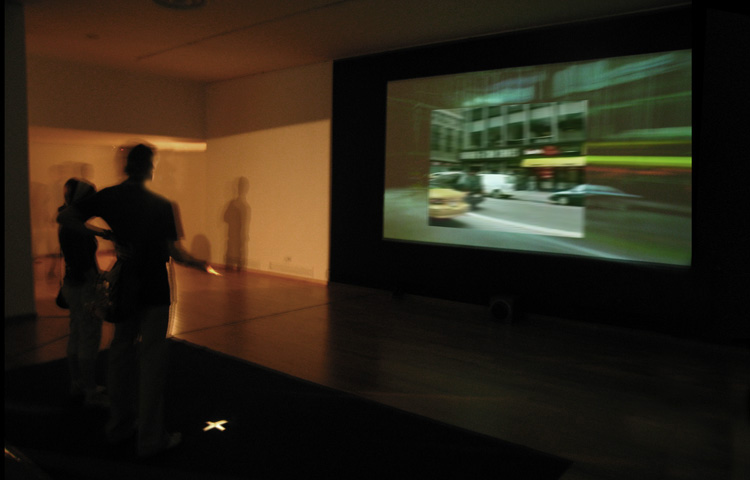 On the Plaza San Pietro in front of St. Peter’s Cathedral in Rome there is a particular point from where the surrounding four rows of pillars disappear behind the first row, and the space behind presents itself as a panorama, divided into transposed images. When you enter the darkened room of the video installation ‘Dislocations’ your eyes are immediately drawn towards a white cross on the floor, lit from above by a spotlight.

read more
And just as in the plaza in front of St. Peter’s, this marks the spot where something happens, where the horizon shifts and opens up a different perspective.
The means by which Martijn Veldhoen extends the visual field of the observer has, apparently, little to do with the architectural perspective of the Saint Peter’s plaza. The installation consists of a large screen onto which video images are projected: city and rural panoramas that are completely devoid of any human presence. The images succeed each other in a slowly rotating longshot in which separate panoramas link up to form a seamless, gigantic super-panorama. But the moment that the observer – drawn inexorably towards the spotlighted white cross – steps under a movement- detector, the tranquillity of the panorama is rudely disturbed. A salvo of rapidly alternating fragments moving across the serene and silent panorama ensures that the empty streets and desolate rural landscapes are suddenly populated with people, animals, cars and planes. Everything in ‘Dislocations’ rotates – almost literally – around the observer. In two encircling movements, comparable with the manner in which the earth rotates on itself and around the sun, the projected images turn the observer into a pivotal-axis. Deprived of his body and reduced to a ‘point’ with eyes and ears, he floats around, suspended in a world without clear demarcations of time and space, a world which, just like that of the current electronic media, is based entirely on sensory perceptions. Not until he acknowledges the presence of his body and engages it to activate the second series of images, can he return to a sort of reality that is physical: where time and space – according to the ancient laws of the architectural perspective – are measured against the size of the human body.