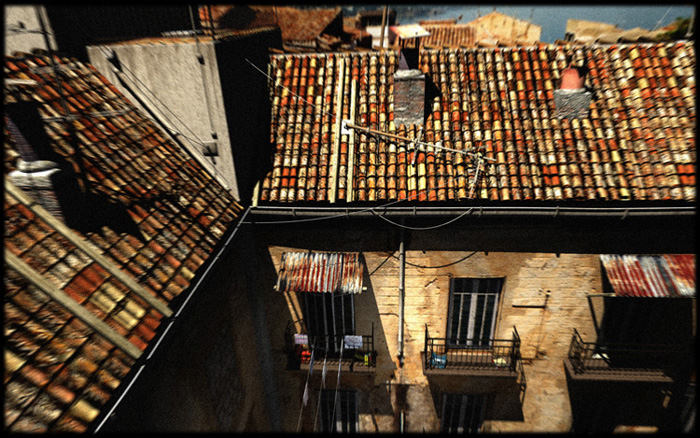 To go is a verb that refers to a movement, without being specific about its nature. Walking, driving or floating, for example, are much clearer in this respect; they describe the movement as something that is connected to the body.

read more
In ‘Momentum’, as viewer, we go in one slow movement through a sequence of spaces. Through corridors, rooms, doors, over balustrades onto a patio, to the street, and then back inside through an open window. Having acquired the ability to take spatial barriers effortlessly, we seem to be losing our physical form. The disappearance of our body silently echoes in the total absence of people in the places we pass through. And perhaps also in the voice we hear, the voice that tells us about an undefined loss.
This long journey through deserted, Southern European spaces paraphrases the final five minutes of Antonioni’s film ‘Profession: Reporter’, in which the camera, in a single shot, starting from inside a building, slowly rolls through a gate into the street. So accustomed are we to editing that we are alerted when the film fails to cut out at the moment when the camera normally could not continue. ‘Momentum’ multiplies this tension, and mixes it with a strange sense of bodiless peace.

The Dialectical Objective
(Why do I keep going) Forward