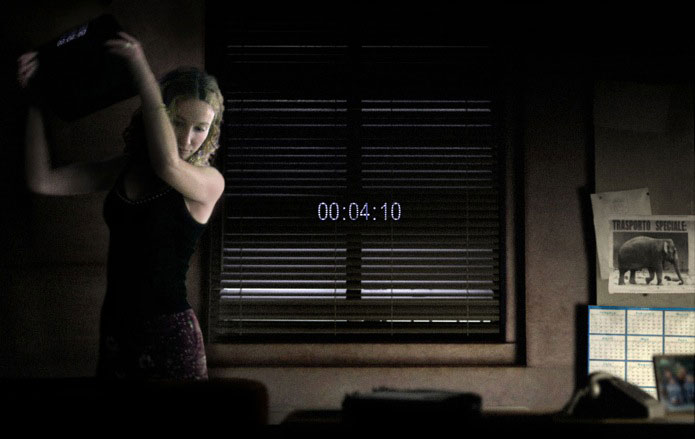 Once ‘public space’ was a clear concept. It was a kind democratic medium that could be accessed by everyone, safely and freely available for traffic between people. Now things have changed; thanks to mobile communication systems, we carry our personal space with us like an air bubble, and the public sphere has become a set of subsets.

read more
Everyone is always connected to something or someone else, so that the space in-between has taken on a virtual form, which constantly changes in time. What is left over between the subsets has the characteristics of a vacuum; it generates forces. It sucks in a great many individuals who cannot or will not ‘participate’, or who do not have or do not want to have access to the means that link the individual bubbles. Veldhoen shows us how differently we now perceive public space, certainly not as a safe place any more. Even though the voiceover has adopted a contemplative tone, there is still a sense of a subliminal threat and a feeling of paranoia; the word Bombe can be read on a wall, like graffiti.

The main characters are moving through a space that Veldhoen has portrayed with a kind of ‘moving photography’ technique, whereby a two-dimensional image becomes three-dimensional and starts to move. We see telling images of a train and a metro station, a market. It is a series of modern ‘guilty spots’. We cannot see the ‘usual suspects’, but time is ticking on mercilessly; and the heralded occurrence will take place.

Prizes:
The work has won the 1st prize at the Videomedeja video festival in 2006 (at the Museum of Vojvodina, Novi Sad, Serbia/Montenegro) and was nominated for a Golden Calf (best short film) at the Dutch Film Festival. The single channel version had its premiere at the Sao Paulo International Film Festival. It was shown (amongst others) on film and video festivals in Clermont Ferrand, Utrecht, Paris (Institut Neerlandais), Osnabrueck (EMAF), Madrid, Seoul, Rome, Ismaelia (Egypt), New York, Canada and China.

The installation version was a part of the exhibition ‘The Discovery of Slowness’. This exhibition showed at the Noord Brabants Museum, Den Bosch, The Netherlands, The National Centre of Photography, St Petersburg, Russia and the CEAC, Xiamen, China.

(Why do I keep going) Forward
RE-constructions