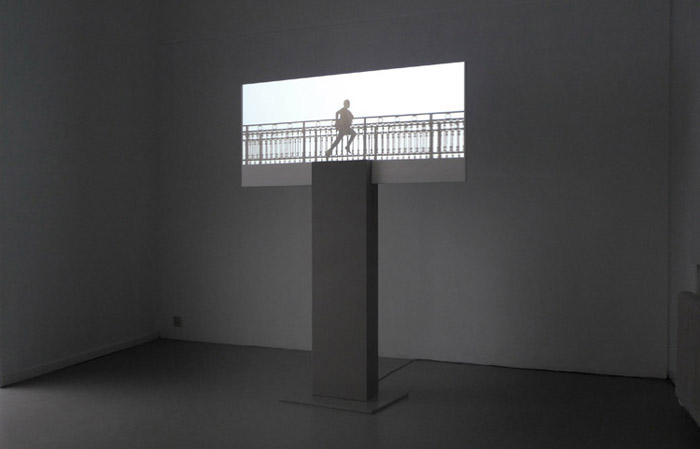 Energetically and full of determination, a man walks over a bridge, among the busy traffic. The warm backlight and the sultry silhouettes of pedestrians, cars and buses suggest that this scene might be recorded in a southern country. However, the bits and pieces of conversation in the background are mainly in English, which gives a universal touch to the action.

read more
The camera follows the walking man in such a manner that he always finds himself exactly in the middle of the frame of the projection screen. The crisp, white screen is slightly sunken into the 1.80m high pedestal. In this way, the pedestal plays a role as a visual element in the image: the man always seems to walk right on top of the pedestal. Traffic and passersby, with bags and mobile phones, all seem to have a destination. But the anonymous protagonists appears to be immobile in his movements.

After a while, traffic becomes more hectic. Ultimately, the flow of people and cars stops. It becomes totally silent. Only the man’s breathing can be heard. He has reached the end of the bridge and carefully walks towards the edge. On one side of the pedestal, there’s a gaping void. Despairingly, the man peers into the abyss, then he panics and rushes back in the other direction. After a while he returns to his normal walking rhythm – until, on the other side, he also reaches the end of the trajectory, looks into the void, and runs back, caught in perpetual motion.

A bridge is a powerful and positive metaphor for approach and connectedness. It is the connecting element between two regions or worlds, a way to remove barriers formed by depths or wild rivers. But sometimes movement is relative. Sometimes connection is an illusion, and we seem to be perpetually involved in returning processes and trajectories, without aim, meaning or goal.